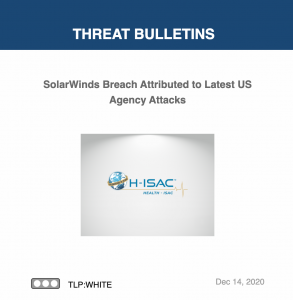 TLP: WHITE — On December 13, 2020, information technology solutions company SolarWinds reported they were breached by Nation State threat actors from Russia.  The breach was used to leverage further attacks against several US federal agencies. SolarWinds released a statement that their systems experienced a highly sophisticated, manual supply chain attack on SolarWinds® Orion® Platform software builds for versions 2019.4 HF 5 through 2020.2.1, released between March 2020 and June 2020.  The US Cybersecurity and Infrastructure Security Agency (CISA) released Emergency Directive 21-01, stating that potential exploitation poses an unacceptable risk and affected agencies shall immediately disconnect or power down SolarWinds Orion products, versions 2019.4 through 2020.2.1 HF1, from their network.

SolarWinds is used by more than 300,000 organizations across the world. Including all five branches of the U.S. military, the Pentagon, State Department, Justice Department, NASA, the Executive Office of the President and the National Security Agency, the world’s top electronic spy agency, according to the firm’s website.

SolarWinds has released a statement that their systems experienced a highly sophisticated, manual supply chain attack on SolarWinds® Orion® Platform software builds for versions 2019.4 HF 5 through 2020.2.1, released between March 2020 and June 2020. We have been advised this attack was likely conducted by an outside nation state and intended to be a narrow, extremely targeted, and manually executed attack, as opposed to a broad, system-wide attack.

SolarWinds.Orion.Core.BusinessLayer.dll is a SolarWinds digitally-signed component of the Orion software framework that contains a backdoor that communicates via HTTP to third party servers. We are tracking the trojanized version of this SolarWinds Orion plug-in as SUNBURST.

After an initial dormant period of up to two weeks, it retrieves and executes commands, called “Jobs”, that include the ability to transfer files, execute files, profile the system, reboot the machine, and disable system services. The malware masquerades its network traffic as the Orion Improvement Program (OIP) protocol and stores reconnaissance results within legitimate plugin configuration files allowing it to blend in with legitimate SolarWinds activity. The backdoor uses multiple obfuscated blocklists to identify forensic and anti-virus tools running as processes, services, and drivers.

Multiple trojanized updates were digitally signed from March – May 2020 and posted to the SolarWinds updates website, including:

The trojanized update file is a standard Windows Installer Patch file that includes compressed resources associated with the update, including the trojanized SolarWinds.Orion.Core.BusinessLayer.dll component. Once the update is installed, the malicious DLL will be loaded by the legitimate SolarWinds.BusinessLayerHost.exe or SolarWinds.BusinessLayerHostx64.exe (depending on system configuration). After a dormant period of up to two weeks, the malware will attempt to resolve a subdomain of avsvmcloud[.]com. The DNS response will return a CNAME record that points to a Command and Control (C2) domain. The C2 traffic to the malicious domains is designed to mimic normal SolarWinds API communications. The list of known malicious infrastructure is available on FireEye’s GitHub page.

Currently known Indicators of Compromise (IOC) have been entered into Health-ISAC’s automated sharing platform for those members ingesting automated threat indicators. Health-ISAC’s Threat Operation Center will continue to monitor the incident, while aggregating and ingesting IOCs made available.

The attached PowerPoint presentation is also provided to assist with high-level communications of key points related to this event within your own organization.  Health-ISAC members are encouraged to use the PowerPoint file, put it in your own templates, if necessary, and share any updates (at your option) with the TOC, so we can make further improvements.