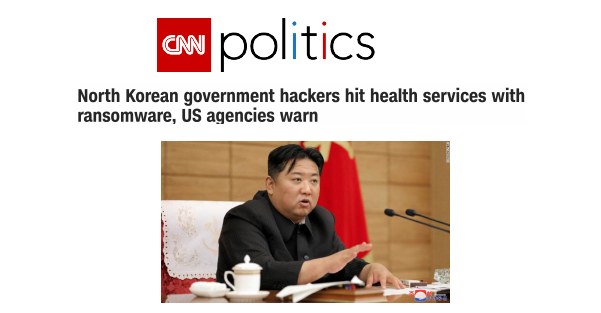 (CNN) North Korean government-backed hackers have in the last year targeted multiple health organizations with ransomware, in some cases disrupting health services for “prolonged periods,” the FBI and other US agencies warned on Wednesday.

The North Koreans have used the ransomware — a type of malicious computer code that locks computer files — to encrypt computer systems hosting electronic health records and diagnostics and imaging services, the FBI, Department of Treasury and US Cybersecurity and Infrastructure Security Agency (CISA) said in an advisory urging health care organizations to bolster their cybersecurity.
It’s the latest indication that state-sponsored hackers from countries like North Korea and Iran are willing to deploy ransomware against the health sector — a tactic more often associated with non-state cybercriminals. FBI Director Christopher Wray in June blamed Iranian government-backed hackers for a “despicable” cyberattack on Boston Children’s Hospital last year, an allegation that Tehran denied. No ransomware was deployed in that case, but Iranian hackers were the subject of another US advisory on ransomware in the health sector in November.
Health care facilities already strained for resources because of Covid-19 have had to deal with disruptive ransomware attacks throughout the pandemic. One IT administrator at a 100-bed hospital in Florida recounted to CNN in January how he shut down the facility’s computer systems in January to prevent a ransomware attack from spreading throughout the hospital.
The fall of 2020 saw a wave of ransomware attacks on US hospitals from Russian-speaking cybercriminals, including one apparent ransomware incident in October 2020 that forced the University of Vermont to delay chemotherapy appointments.
In their advisory Wednesday, the US agencies on Wednesday did not name the organizations victimized by the alleged North Korean hackers. The Health Information Sharing and Analysis Center, a cyber threat sharing group for big health care providers worldwide, did not identify any of its members as victims, said Errol Weiss, the group’s chief security officer.
“I would imagine the victims were smaller organizations and not prepared to handle a ransomware attack,” Weiss told CNN. North Korea has for years belied stereotypes of a technology-deprived country to build a formidable hacking force. The US government accused Pyongyang of developing the so-called WannaCry ransomware in 2017, which spread to more than 200,000 machines in 150 countries. The incident cost Britain’s National Health Service alone more than $100 million.
“Among its peers, North Korea is unique in their deep, active involvement in cybercrime,” said John Hultquist, vice president of intelligence analysis at cybersecurity firm Mandiant. “Unlike other countries who may contract and bargain with domestic criminals, the North Korean state carries out cybercrime directly, against targets all over the globe.”
This website uses cookies to improve your experience and we may collect data from you when you interact with us through the website. We'll assume you're ok with this, but you can opt-out if you wish.Accept Read More
Privacy & Cookies Policy